Home > News > California Buckwheat: A “Must-Have” Even If It’s Not a Bay Area Native

California Buckwheat: A “Must-Have” Even If It’s Not a Bay Area Native

California Buckwheat almost doesn’t need soil: give it a pile of rocks in full sun and it will probably be right at home. Once its root system is established, it can live for up to 50 years, requiring only the seasonal rainfall. It frequently flowers for months on end in the heat of summer after other flowers have called it quits. It supports a diversity of wildlife. What’s not to love?! 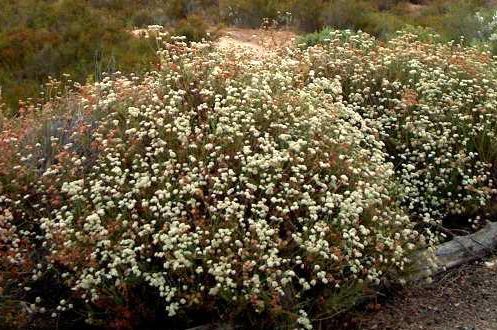 There are four varieties of California Buckwheat, Eriogonum fasciculatum, in California; they are found primarily in the southern third of the state: one uncommon coastal low-grower, two at home in the deserts, and the most widespread variety, E. foliolosum. This variety is the most often cultivated, although the southern and desert dwelling variety E. polifolium is also planted extensively. E. fasciculatum var. foliolosum is so tough and dependable that it has been used as roadside revegetation for generations. Checking herbarium collection records, a pattern emerges: plants north of Carmel and Hollister were almost all collected on road cuts, often with a note that they were likely planted. As a mater of fact, they have been planted so widely and for so long, that many people in the San Francisco and Monterey Bay areas assume that they are part of the indigenous flora. With few exceptions, this does not seem to be the case. For this reason, it is likely not a good candidate for local restoration projects. 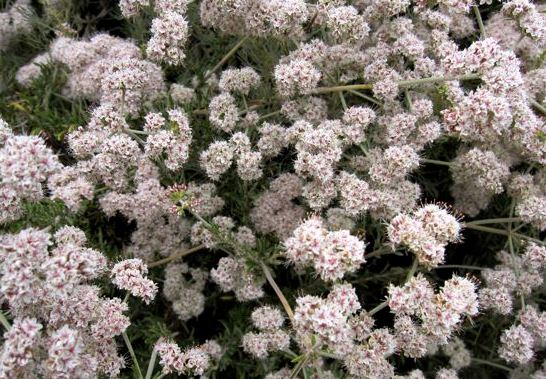 E. fasciculatum is a medium sized shrub with small needle-like leaves and brittle twiggy branches. The variety foliolosum varies in height from 1.5 to 4 feet, and the leaf color varies from dark to light green depending on the density of moisture-conserving hairs. The leaves of variety polifolium are typically almost white-hairy, an adaptation to its hotter and drier origins. The individual flowers are very small, but aggregate into dense clusters, or flat “landing pads” displayed at the tips of the branches, sometimes nearly obscuring the leaves. White to pink or creamy flowers bloom for several months, and then fade to a coppery reddish “buckwheat brown.”

California Buckwheat attracts pollinators by the dozens, including tiny native bees, honeybees, and a kaleidoscope of butterflies. In one study, thirty-one species of visiting bees were identified, eight of which are considered important crop pollinators. These shrubs are host plants for the caterpillars of butterflies such as Mormon Metalmarks and Blue Coppers. Harvester ants carry off the seeds, some of which may sprout into new plants with winter rains. Seed is also eaten by birds, such as towhees, finches and dark-eyed juncos. Deer will browse the plants, but rarely cause life threatening damage. In my Aptos (Santa Cruz County) garden, they were ignored by deer, rabbits, ground squirrels and gophers!

In the garden, California Buckwheat can be planted almost anywhere that has well-drained soil and an abundance of sunshine. Due to its brittle branches, you may want to place it out of tricycle range. It naturally mixes it up with California Sagebrush (Artemisia californica), Black Sage (Salvia mellifera), White Sage (Salvia apiana) and Deerweed (Acmispon glaber). It can also grow in chaparral, with Manzanitas (Arctostaphylos species), Chamise(Adenostoma fasciculatum), Toyon (Heteromeles arbutifolia) and Chaparral Currant (Ribes malvaceum). The soft flower colors blend well with other colors, from orange Sticky Monkeyflowers (Mimulus aurantiacus) to blueish Canyon Wild Rye (Elymus condensatus ‘Canyon Prince’) or even bright red Island Snapdragon (Gambelia speciosa). Plant it with pale-leaved California Sagebrush in front of dark leaved Ceanothus species, Hollyleaf Cherry(Prunus ilicifolia) and Coast Silk-Tassel (Garrya elliptica) for year round interest. No bank is too steep or too hot for this plant, as long as it is planted in the fall and provided with supplemental water if rains are sporadic. If the plants get too leggy, woody, or large, they can be cut back in the fall which will encourage fresh growth with the onset of rain. However woody plants resent this treatment and may need to be replaced.

As the ongoing drought reminds us that water is precious and that lush lawns are wasteful, a suite of beautiful California native plants waits in the wings for an invitation back into our yards. They offer the delight of watching butterflies and birds, with no purchase of bird food necessary. They soften the harsh juxtaposition of housing with wildlands, by uniting the scenery and rooting us firmly in the ecology of this place we call our home.